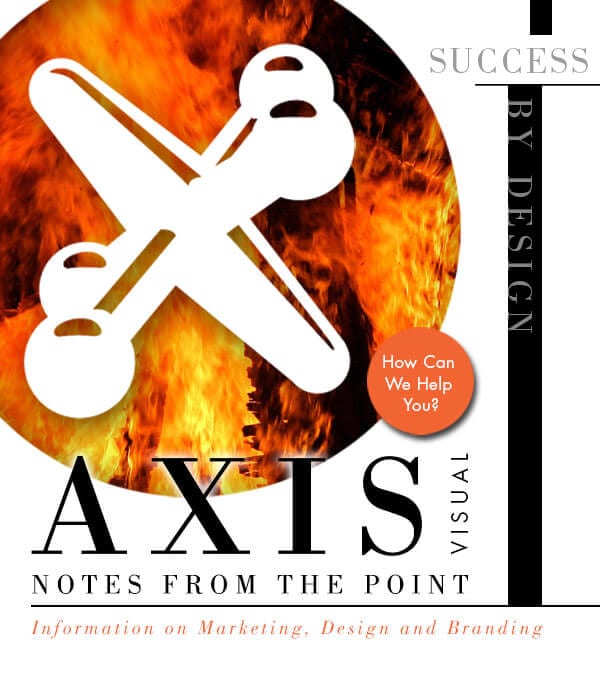 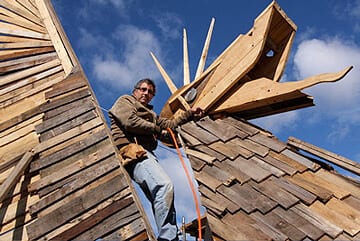 You may have heard me say this before, or seen it on the AXIS site. Now, I am aware that “everything” may take a little while. But I’m working on it. The process of thinking through the different challenges of each client, product or customer base is a real pleasure to me. But this one is very different. A 28-foot wooden sculpture of a Phoenix. And on December 13, 2008 it goes up in flames.

For a number of years I’ve worked with a community group in Phoenixville PA that puts on an arts festival in December. At the end of the festival we burn a large wooden phoenix as a symbol of the towns rebirth, and also, simply as entertainment for the community. We kind of play with matches on a large scale.

Like many Pennsylvania towns, Phoenixville (named after the Phoenix Iron Works in the mid 1800s) had vibrant industrial history that slowly decreased in the 50’s, 60’s and 70’s. Also, like many Pennsylvania towns there has been a renewed growth and interest in recent years. And it’s events like the Firebird Festival that give Phoenixville something different and specific to its history and personality.

Over the years, the responsibility (and fun) of designing the Phoenix has shifted between a few of us, or it’s been a combination of ideas. It starts with the sketching of ideas and the assembly of popsicle stick models in order to work out some of the basic structural issues. The models are then shown to the committee and after a choice is made we divide and conquer. We have volunteers handling the web site, the newsletter, food vendors, entertainment and many other aspects of the evening. For the Phoenix, Wood is ordered. Many people (crowbars in hand) are needed for disassembling pallets (for the “feathers” as we call them). And in about 3-4 weekends we build it. It is such a pleasure working with so many people who want to contribute their time, labor and ideas with the goal of making something, something that will be burned down in a few weeks.

Although the basic process of problem solving has similarities to the graphic design process, the design of something like this is a very different. Before we start building a plan is needed to determine how it can be assembled (in a few weekends), the aesthetic look of the structure (before and during the burning), and how it burns (and falls safely). Oh, and making it strong enough to withstand the November winds prior to the event is critical. Giant wooden wings tend to catch a lot of wind and on a few occasions it has resulted in emotional demoralization and the need to rebuild a broken Phoenix at the last minute. As we build it there are constant reevaluations of all these issues. We reinforce some areas with additional layers of wood to slow the burning process and drill holes through other structures to let in more air and speed the burning. We think about how the fire will travel through the structure, how different areas will look as they burn, what order different areas will burn through and we try to create an almost theatrical dance of fire and wood. It’s a one of a kind experience for the people (4,000 in 2007) that come out on a cold winter night to see the biggest bonfire in the tristate area (OK, I’m guessing on that one).

With each year’s construction and each different design we’ve learned a little more about how to build the Phoenix efficiently and how fire travels through it. After the work and the labor and the “theory” of what we think should happen, on the night of the event we watch and see if the fire does what we think it will. There is often a surprise or two, but we have gotten better at controlling the fire. And I use the term “controlling” very loosely here.

I am often asked if it’s difficult burning a “sculpture” that involved so much thought and labor. And after spending some time thinking about it, I’ve come down to this: There is some sadness to it. Anyone who puts a lot of effort into almost anything has some degree of attachment to it. And I think this year’s is aesthetically my favorite, although I liked 2006 a lot too. But it is designed to perform the task of burning. It is designed to create an experience for our community. It is essentially a stage set that exists solely for a single performance. And on December 13th it’s a double bonus for me. I get to see this local (and slightly odd) Phoenixville tradition, and when I watch the 4,000 people who are bundled up, bearing the elements, waiting for us to “light ‘er up”, I feel the pride of having contributed to the event. 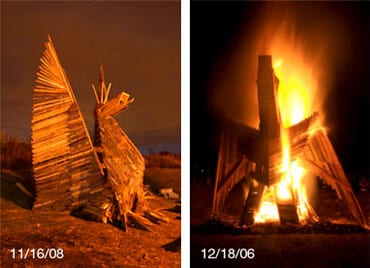 Of course, designing, building things and then burning them down is not how AXIS visual and I spend most of our time. We’re here to help you with your marketing communications, branding and advertising needs. You know, all the visual tactics that if done well separate you from your competition and makes your company memorable. Let us know if we can help.

Below are a few spreads from the latest issue of Envision magazine. It’s a publication focusing on the arts community in the South New Jersey, Southeast PA and Delaware. AXIS visual has enjoyed designing the magazine and contributing to it’s success.

To see many more samples of our work please visit our website at www.axisvisual.com 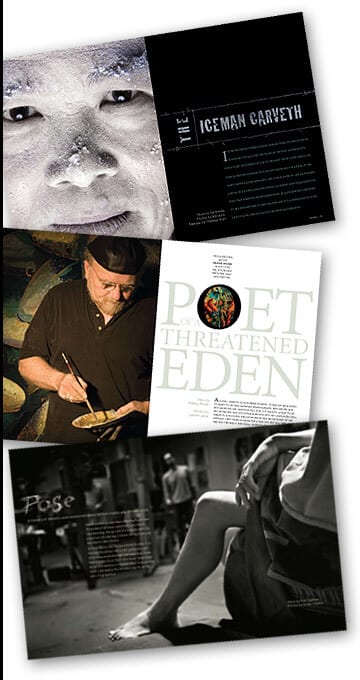